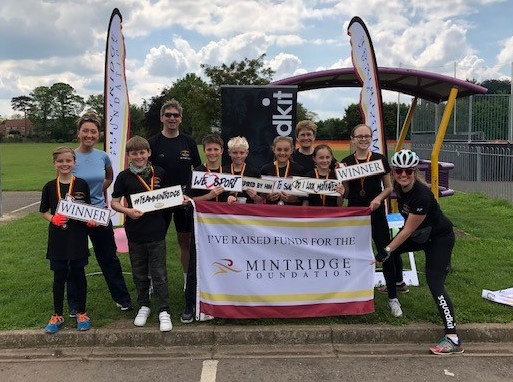 Year 6 pupils geared up for a cycle ride this week to help raise funds for the Mintridge Foundation - a charity that supports young people through positive sporting role models.

The youngsters accompanied charity founder and former Prep pupil Alex Paske on the Kimbolton to Brampton leg of her 100-mile fundraising cycle ride from Northants to Norfolk. They were joined by Prep School Headmaster Mr Foley and PR & Communications Manager Mrs Ainsworth on the 11.5 mile route via Perry and Grafham.

Further funds were raised the following day in the ‘Mintridge Mile’ challenge, which saw all Prep pupils donate £1 to run, walk or skip the distance around the School grounds.

Prep Headmaster Mr Foley said: “Sport in all its forms plays an invaluable role at the Prep School in shaping the wider personal development of all of our pupils, as well as promoting an awareness of the importance of lifelong fitness and well-being. For many children, however, access to sport is limited and this is where Mintridge comes in. Our aim is to raise the ambitious target of £1000, which will be used by Mintridge to provide opportunities for other children to enrich their lives.”

Alex will be the Guest Speaker at our Prep School Speech Day on Friday 24 May, where she will  share memories and fundraising achievements with pupils, parents and staff.