EPQ Students Celebrate Clean Sweep of A* / A Grades 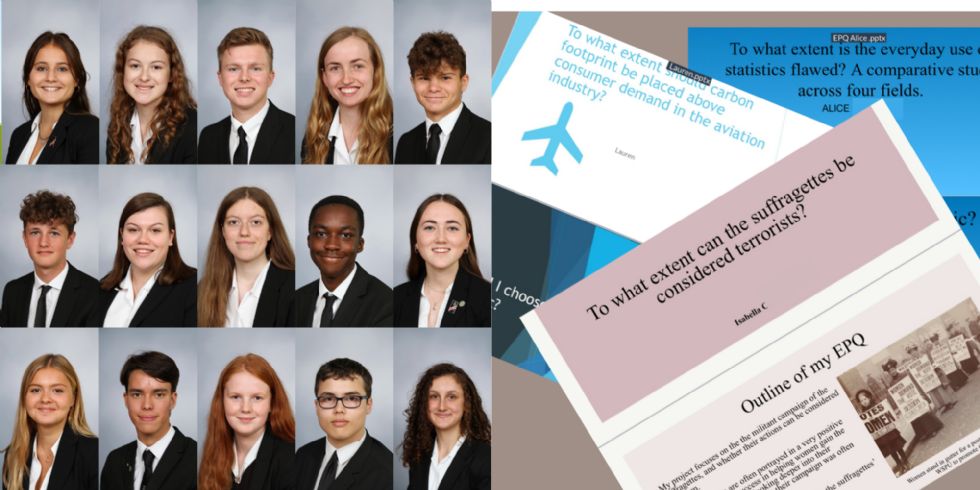 Fifteen Upper Sixth Form students are celebrating after achieving a clean sweep of A* / A grades in their externally assessed Extended Project Qualification (EPQ). To achieve this, each pupil wrote a 5000-word essay on a topic of their choice, gave a 12-minute oral presentation on their research and conclusions, and maintained a detailed research logbook.

An interesting and varied range of projects were completed, often reflecting the sorts of areas in which the students might wish to specialise in in the future. Topics included: ‘To what extent should social media users be held responsible for their activity online?’, ‘To what extent should the placebo effect be used for healthcare benefits?’, and ‘Should the UK aim to become a ‘cashless society?’

Anna's project examined ‘To what extent is prison the right option for young offenders?’ She says she found it fascinating to explore the subject in such detail, outside of her A Level studies. “My research showed that placing children into custody is not helping to drive down the number who go on to reoffend. During their time in custody, young people miss out on valuable life experiences, which are essential for their growth as people. It has a significant impact on them for many years to come, in regard to their development and in terms of job prosperity. I concluded that putting juveniles into prison is unfair. Anyone over the age of 10 is deemed responsible enough for their actions to be sent to prison, yet society doesn’t award many responsibilities until you reach the age of 18. There is an inconsistency which needs to be addressed. I suggested two possible options, either to reform or replace the system, with rehabilitation as the focus.”

Fellow Sixth Former Craig investigated ‘The extent of racism in higher education’. He reflects: “The EPQ provided an opportunity to enhance my skills of research and time management. As it is an independent project, the onus is on you to complete the work to the schedule; this responsibility was later invaluable when it came to completing coursework in my A Levels. Taking the EPQ meant I could not only write about my passion and what interests me but also gain a qualification whilst doing so. I’d thoroughly recommend the EPQ to any student who has a topic that deeply engages them!”

Kobe agrees. She says: “My chosen topic was ‘To what extent do the novels Rebecca and The Wife of Bath’s Tale undermine the gender roles that were conventional in society at the time they were written?’. I’ve gained valuable independent study skills that will certainly be useful when it comes to starting university, and I’ve had the chance to learn more about a topic that I’m really passionate about outside my normal school studies.”

Mr Newsam, Assistant Head (Extension & Enrichment), adds: “This is a particularly impressive achievement for all of the students, given the ‘remote learning’ circumstances under which most of their research and writing was completed. Under Covid-19 restrictions it really has been a qualification that has developed their independent learning skills, and I am sure that it will set them up nicely for similar sorts of tasks at universities. We are so proud of their fantastic work.”