Summer Concerts at the Castle 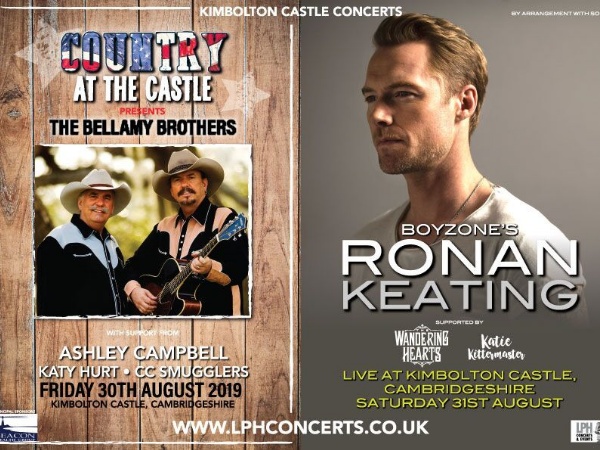 Boyzone star Ronan Keating will be headlining a concert in the grounds of Kimbolton Castle this summer. 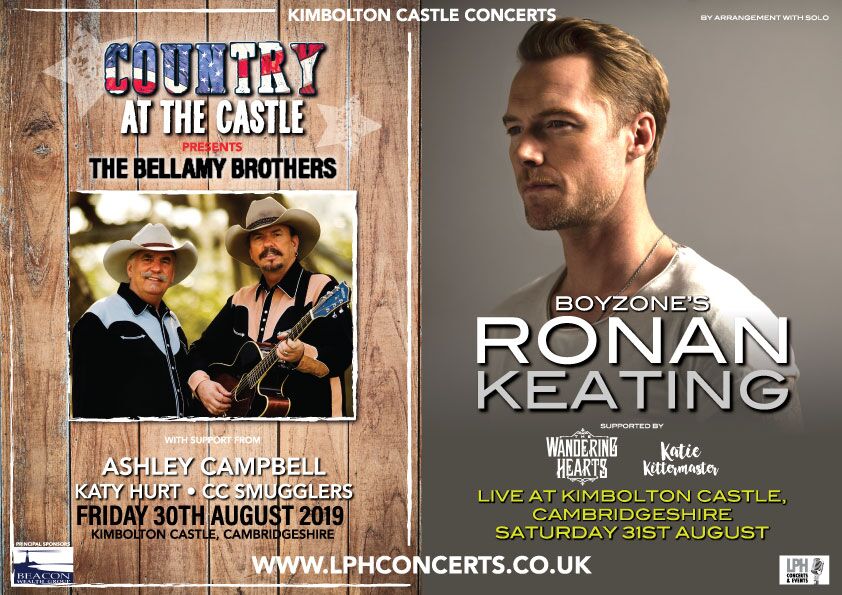 The Kimbolton School Parents' Association has announced the full line-up for its August 2019 summer concerts at Kimbolton Castle. The music extravaganza begins on Friday 30th August, with a night of toe-tapping Country that is family-friendly and easy listening. 70s icons The Bellamy Brothers will be doing just one UK show on their European Summer tour here at Kimbolton - you'll recognise lots of their classic numbers, including ‘Let Your Love Flow’. Joining them on-stage are Ashley Campbell, a second generation country superstar (daughter of the famous Glen Campbell), local band ‘The CC Smugglers’ and up-and-coming singer-songwriter Katy Hurt.

On Saturday 31st August it's all change, as Boyzone star Ronan Keating headlines an amazing night of pop, with support from The Wandering Hearts.  Born in Dublin, Ronan originally found fame as part of the hit nineties boy band founded by Louis Walsh. The group achieved unparalleled success all over Europe and were widely touted as Ireland's answer to Take That. In those initial five years, he enjoyed success with an incredible 16 top five singles, six of which hit the number one spot. In August of 1999 he had his first ever solo number one with ‘When You Say Nothing at All’ from the hit movie Notting Hill. His debut, self-titled, album shot straight to number one in the UK Album Charts and went on to sell a very impressive 4.4 million copies around the world, firmly establishing Ronan as an artist in his own right.

Ronan boasts a lifetime of impressive professional achievements including: dueting with Elton John at Madison Square Garden, singing for the Pope, hosting everything from Eurovision Song Contest and MTV Europe Awards, acting as a judge on the no 1 TV show X Factor in Australia, recording with Yusuf Islam (Cat Stevens), writing an autobiography, guiding Westlife to stardom, winning a prestigious BMI European Song Writing Award, winning an Ivor Novello Award, being appointed as a UN Goodwill Ambassador, providing the singing voice for Postman Pat, plus too many hits, gigs and awards to keep count.

In his 26th year in the music industry, Ronan’s prolific, varied and highly successful career shows no sign of slowing!

Please note: This is a non-picnic event and you are not permitted to bring any food or alcoholic drink inside the fenced concert arena. Soft drinks will be permitted into the concert arena but are restricted to 500ml per person, in a sealed bottle only. Fully licensed bars offering variety of alcoholic and non-alcoholic cold beverages will be available on site.