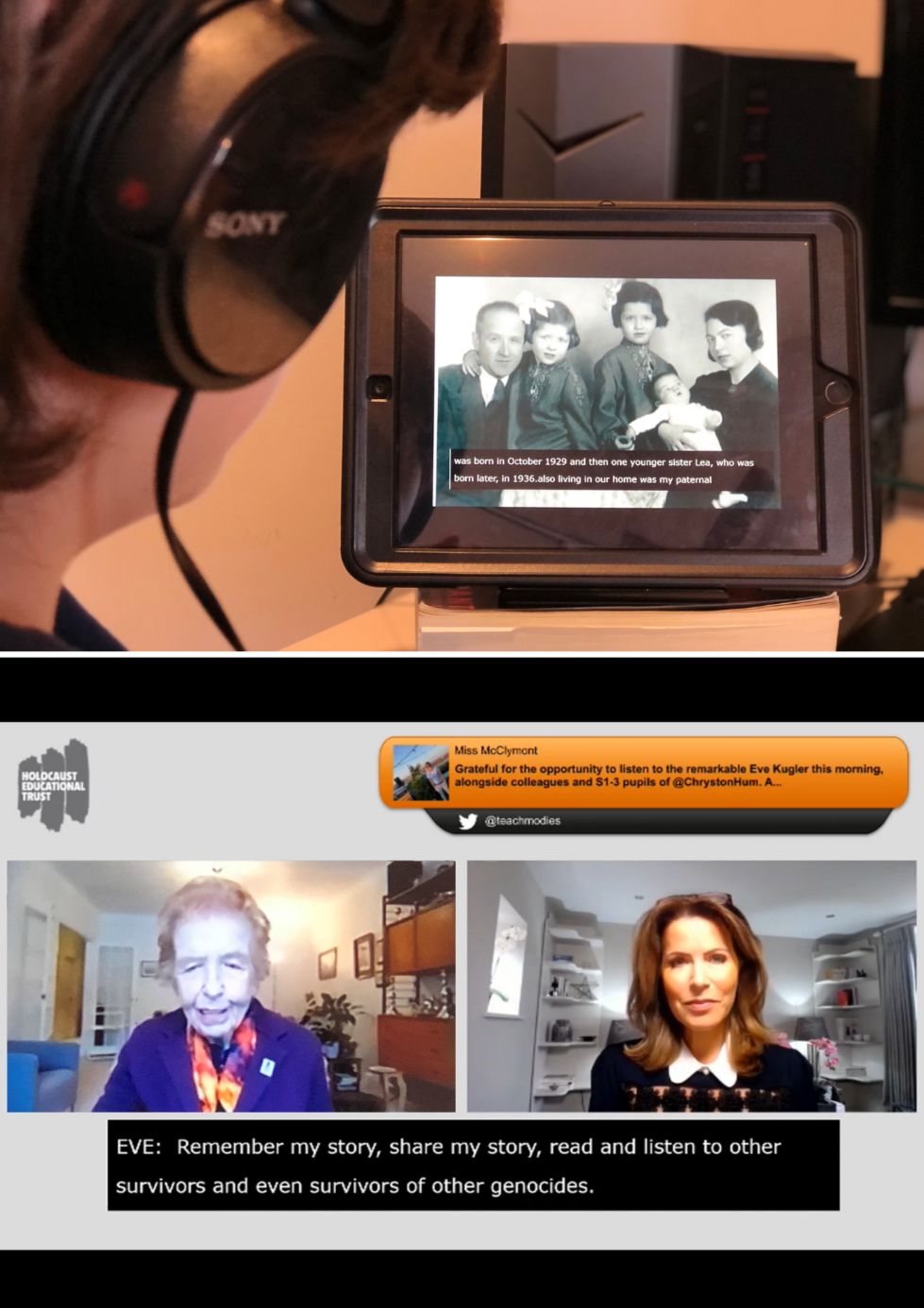 To mark Holocaust Memorial Day (27 January 2021) Third Form pupils joined a live webcast with Holocaust survivor Eve Kugler BEM and presenter Natasha Kaplinsky OBE. Eve, who was born in Germany, was seven years old in 1938 when ‘Kristallnacht’ – the Night of Broken Glass – took place. Her family was torn apart by the Nazis: her parents sent to concentration camps, her youngest sister Lea forced into hiding in France, and Eve and her other sister Ruth sent to America.

As Eve shared her harrowing life story, she recalled the day six uniformed Nazis came for her father: “I stood at my bedroom door and watched as they stormed through our apartment. They overturned furniture, emptied linen, clothes and kitchen cupboards, trampling on the contents. In a frenzied attack in Grandfather’s room, they tore apart his sacred Hebrew texts.”

Eve told her online audience how her family was briefly reunited in Paris, before war broke out in September 1939, when the French interned her father as a German national. Eve and her sisters were sent to various homes for displaced Jewish children, run by the Jewish welfare organisation, OSE. She recalled feeling cold and hungry, due to severe shortages of food and fuel.

In 1941, when Eve was 10, the United States issued visas for several hundred Jewish children trapped in French concentration camps. When the French Resistance could not get the children out of the camps, the visa was given to the OSE. Eve said: “At the last minute, Ruth and I took the place of two children who had suddenly become ill ... But I remember nothing of sailing across the Atlantic Ocean.” The sisters were separated and went on to live in multiple foster homes.

Eve’s youngest sister, five-year-old Lea, remained in France - hidden first in a Catholic convent and then on an isolated farm. She later told Eve she witnessed appalling atrocities, including men and women marched into a field and shot. Meanwhile, Eve’s mother and father survived French concentration camps, and were miraculously spared from deportation to Auschwitz. Incredibly, after five years of separation, Eve and her family were reunited in New York in 1946.

Explaining her reasons for sharing her experiences, Eve said: “I didn’t talk for a long time. But my mother felt that everyone has to know what happened to us, or it is going to happen over again ... Meeting a survivor makes an impression that no movie, no lecture, no classroom lesson can match. I owe it to the millions of Jews who perished in the Holocaust.”

Holocaust Memorial Day, established in 2000, is marked each year on 27th January – the anniversary of the liberation of the Nazi concentration and death camp Auschwitz-Birkenau. The day is co-ordinated by the Holocaust Memorial Day Trust and the theme for 2021 is ‘Be the Light in the Darkness’.

Kimbolton School History teacher Mr Ben Mills said: “At Kimbolton we are always keen to pause and reflect on Holocaust Memorial Day. In previous years, we have been privileged to welcome Holocaust survivors including Eva Clarke BEM and Ruth Barnett MBE, each with their unique and troubling but inspiring testimonies. The Third Form traditionally take part in a series of special cross-curricular seminars, which unfortunately was not possible this year due to lockdown. We are so grateful to Eve and the Holocaust Educational Trust for facilitating this opportunity for our pupils to hear from Eve - and by doing so become witnesses to the Holocaust themselves. We can all learn from Eve and use what we heard to help us 'be the light' in a multitude of ways moving forward.”