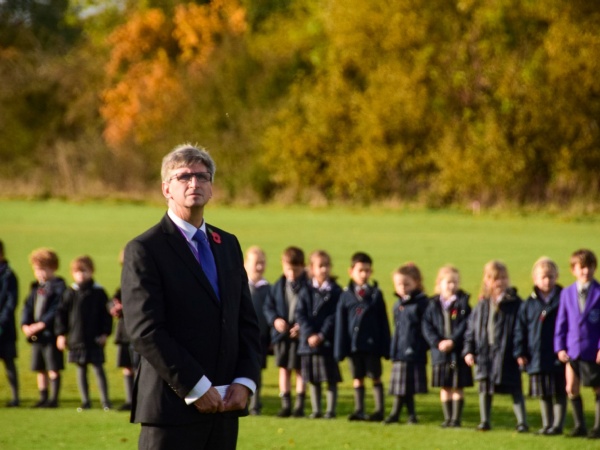 The whole school paused this morning to observe the Act of Remembrance at 11am.

The whole school paused this morning (Thursday 11th November) to observe the Act of Remembrance at 11am. At the Senior School, pupils gathered around the West Lawn, while younger children from Reception to Year 6 formed a circle in the courtyard at the Prep School. Senior School trumpeters played the Last Post and Reveille at both locations, during which the Castle flag was lowered to half-mast.

This is the first of several events linked to Armistice Day in which the School is involved. On Sunday, town and gown will join together to commemorate The Fallen as the School's CCF, along with village youth groups, support the Kimbolton Branch of the Royal British Legion in its parade and Act of Remembrance. Further afield, in London, 15 of our Senior cadets will enjoy the chance of a lifetime to take part in the Festival of Remembrance at the Royal Albert Hall on Friday and Saturday. A further 15 will take part in the national parade that marches past the Cenotaph in front of the Royal Family, political leaders, current and ex-members of the Armed Forces and World War veterans.