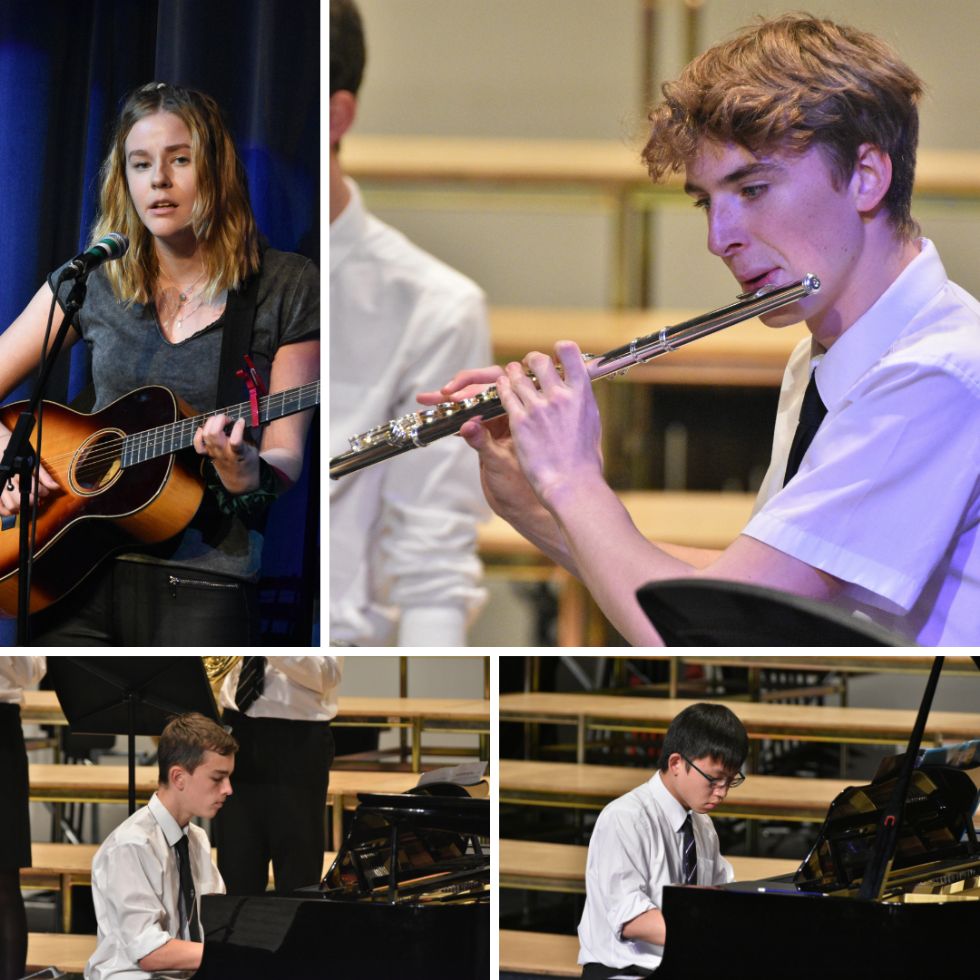 Four Sixth Form students have achieved outstanding results in their recent ABRSM music exams (Autumn 20 and Summer 21). Christopher (piano), Emily (Singing for Musical Theatre), Lavigne (flute), and Toby (piano) were all awarded Distinction at Grade 8 and will have their names added to the Music Department’s honours board. In addition, Christopher achieved a Distinction in his ARSM performance diploma on flute, while Lavigne secured a Merit at Grade 8 violin.

Christopher, 18, is studying for A Levels in Biology, Chemistry and Maths, and has been offered a place to study Medicine at the University of Nottingham. He hopes to continue playing the flute in one of the University orchestras, alongside working towards his ARSM diploma in piano. He said: “Since joining Kimbolton in Reception I have had many fantastic opportunities to develop my musicianship beyond lessons, playing alongside other people multiple times a week. I have also had the chance to perform in front of an audience either as part of an orchestra or as a soloist, which has helped make the experience less daunting and more enjoyable. A highlight for me was playing alongside professionals in the band for the School production of Les Miserables.”

Fellow student Toby also hopes to study Medicine in the future. The 17-year-old noted: “Kimbolton has helped me hugely in my music career - not only to develop technically, but also to form my own style and interpretation of pieces. A highlight would have to be the GCSE music trip to The Barbican to listen to The Rite Of Spring. I had never been to a concert before, and I loved it.”

Meanwhile gifted singer Emily, 17, is hoping to audition for drama schools next year. She has taken an active role in many school productions since joining Kimbolton in Year 3, fitting rehearsals around A Level studies in Drama, English Literature and Music. She says: “The opportunity to be in the School choir and Chamber choir has helped me improve as a musician, while Kimbolton Presents… and House music have been so much fun. I’ve taken part in every production possible, performing in eight and student directing for one of the junior school productions. I’m so looking forward to Sweeney Todd next year!”

Boarding student Lavigne, 17, fits his music commitments around A Level studies in Biology, Chemistry, Maths and Music. He reflects: “If it were not for the musical scholarships that the school provides, I would not have continued with flute and violin to reach Grade 8. There were also many enjoyable opportunities for me to perform with other people, such as Concert Band, CCF Band, and School Orchestra.”

Look out for Emily, Lavigne and Toby performing in school next term – our musical calendar features lunchtime concerts, an evening Autumn concert and of course the whole school production of Sweeney Todd.