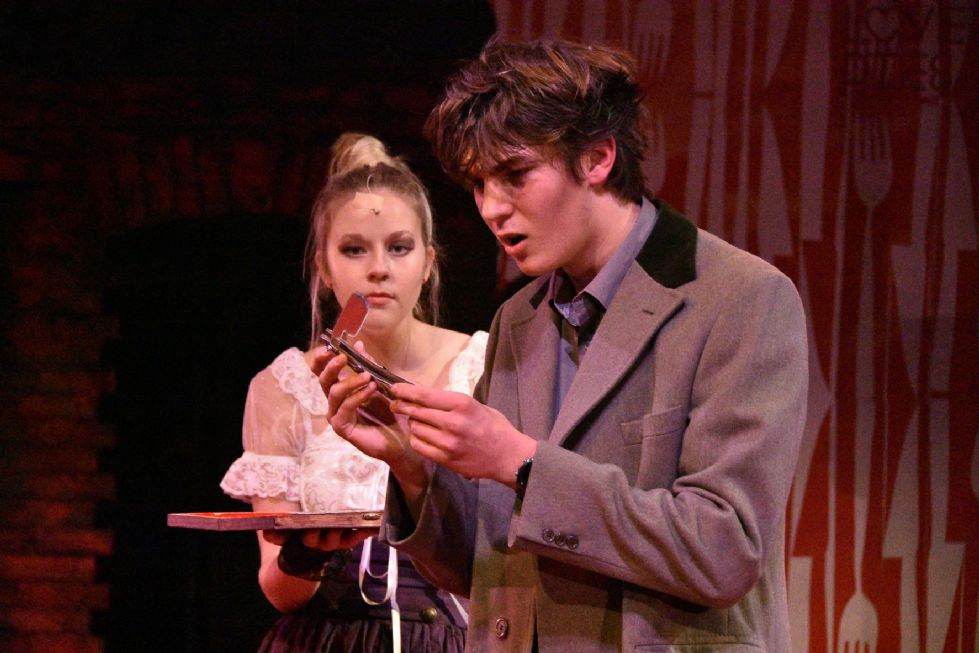 “Outstanding!” was the verdict of audiences at our Senior School's sell-out production of Sweeney Todd: The Demon Barber of Fleet Street, which ran over three nights in the run-up to the Christmas holidays. The eagerly anticipated musical adaptation of Hugh Wheeler’s book, with music and lyrics by Stephen Sondheim, was originally performed on Broadway in 1979, based on the 1973 play of the same name.

The show follows the story of Benjamin Barker, a barber in Victorian London who returns from Australia with a new name – Sweeney Todd – and a thirst for revenge. Barker, now Todd, was unjustly sent into exile by the powerful and cruel Judge Turpin, who used his position to take the barber’s wife for himself.

Todd is accompanied by a young sailor, Anthony, whom he met on his travels. Anthony falls in love with a young woman, Johanna – the ward of the Judge. Todd learns from Mrs Lovett, owner of the worst pie shop in London, that the Judge took the barber’s daughter and left the wife destitute. She eventually poisoned herself, and this news leaves Todd distraught. He and Mrs Lovett hatch a plan, to gain revenge on the Judge and make the most of Sweeney’s cut-throat barber skills.

What follows is a thrilling, bloody tale, with darkly comic moments, unforgettable characters and songs, and a plot with many twists and turns.

Our production was loosely set in industrial Victorian London, and we added ‘Sweeney’s Friends’ - manifestations of his evil machinations, who aid Todd in his murders. The impressive musical featured over 70 talented performers, supported by a full orchestra of School pupils and staff. Pupils also assisted with the technical aspects of lighting and sound, back-stage direction and support, costumes and the creation of a fabulous stage set (overseen by our Art department’s Mrs Bamford and Mrs Hollingshurst).

Alistair, Fourth Form, took the lead with an outstanding performance as Sweeney Todd – his first time having a major role in a whole school production. A keen musician, he ably coped with the vocal range and captured the darkly menacing emotion required. Emily (Mrs Lovett) provided mature and powerful support in her tenth and final casting in a School production. The gifted singer, 17, is hoping to win a place at drama school following A Levels in Drama, English Literature and Music this summer.

Fellow Sixth Former James (Anthony Hope) rose to the challenge of a tricky role that came with fast and difficult music rhythms, while Ben did a brilliant job of bringing the eccentric Italian Pirelli to life. Mention must also be made of Poppy (Johanna), Charlie (Tobias Ragg), Maisy (Beggar Woman), Luke (Judge Turpin), Ellis (The Beadle Bamford), and the incredible energy of the supporting ensemble cast and orchestra.

The musical provided a breathtaking showcase for the acting, singing and design talent amongst our pupils. Congratulations to everyone involved – particularly against the backdrop of ever-changing Covid challenges!